Anyone who knows me knows that I love history and geology. Combine that with a scenic hike and that’s my idea of a perfect day. When I heard that there’s an abandoned mining town at the top of the Huachuca mountains, I was super excited. Not exploring it isn’t an option.

If that’s not enough, throw in the possibility of finding lost gold and quartz crystals. Excited yet?

Searching for crystals, caves, and gold means hours and hours of (free) sweaty exploration. The old mining town is now a forest service campground called Reef Townsite. Mining operations started at the site in 1880 and ended in the 1970’s. The mines are at 7,500-8,000 ft above sea level, and getting up there isn’t easy.

Traveling with Multiple Sclerosis means lots of extra planning before an adventure. Full hydration packs, extra food, a first aid kit, and electrolytes are always in my hiking pack. Another four gallons of water is in the back of my car. There have already been several heat-related hiking deaths in Arizona. It’s unfortunate that so many people visit Arizona from cooler climates and fail to take the extremes out here seriously. I also recommend not hiking alone in the Arizona summer, or if you must hike alone, let someone know your destination and schedule.

Getting to the Mines

The road, and I use that term loosely, up to the Reef Townsite is one of the scariest, jarring switchbacks that I’ve ever ridden on. I don’t have the guts to drive it myself, so Joe takes charge. He does a great job driving us up to the top. If you decide to go, keep the windows up and the AC off of fresh air or you’ll end up choking on the red dust. The entrance to Carr Canyon winds through Coronado National Forest, passing by a bone dry, or gushing (depending on the time of year) waterfall along the way.

About halfway up the dusty, steep switch back there’s a spot to pull over and check out the falls. The site is not marked from the road and for good reason. At least sixteen people have fallen to their deaths. There’s a fence, sign, and warning directly off the road, but people still routinely ignore them.

At the end of the switch back, you have three choices, park to the left to hike up to the mines, turn right to enter the historic Reef Townsite (now a Forest Service Campground) or continue straight to a second campground. If you want to find the mines, park left. If you want to look for crystals and chill out in the shade at woodsy campground, turn right.

One of the reasons I keep going back to Carr Canyon is the geology. Even after traveling all over the world, I haven’t seen anything like the geology up in the Huachuca Mountains. The views stretch out into Mexico for miles. The colors are bursting out of the rocks, and it’s so high up that the wind stings your face and makes it hard to talk. The only thing left to do is look, listen, and take it all in.

If you get tired of looking up at the geology, look down, beneath your feet. Mining was primitive in 1880. The ground is covered in piles of scrap quartz called “tailings.” The old miners dumped the tailings they blasted out of the mines everywhere. Digging and hiking aren’t necessary to find interesting minerals. Fluorite, quartz, and even gold is found lying on the ground everywhere.

Even if you aren’t interested in mining history or geology, Carr Canyon is worth the trip for the views. Although I’ve lived in Arizona before, I had no idea of the spectacular beauty waiting for the adventurous hiker up at Carr Canyon. My only regret for this latest adventure is not having a proper camera to capture the views. I didn’t want to bring my good camera on this long dusty hike, so I settled for iPhone photos.At first I was reluctant to use these photos for this post, but they’re not that bad. I’m starting to understand that everything doesn’t require perfection. 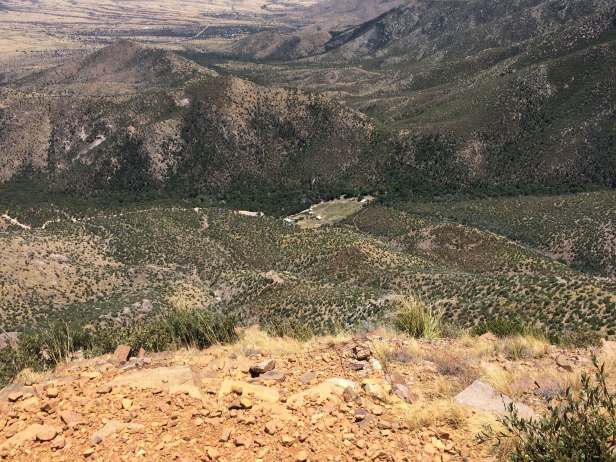 It’s hard to decide what to do because there’s too much to see in just one day. We started out at the campground picking up minerals as we had done several times before. That didn’t last long before we left to find the mines. Although the mines aren’t exactly a secret, they aren’t exactly easy to find either. There are no signs. Only the hint of white quartz tailings. 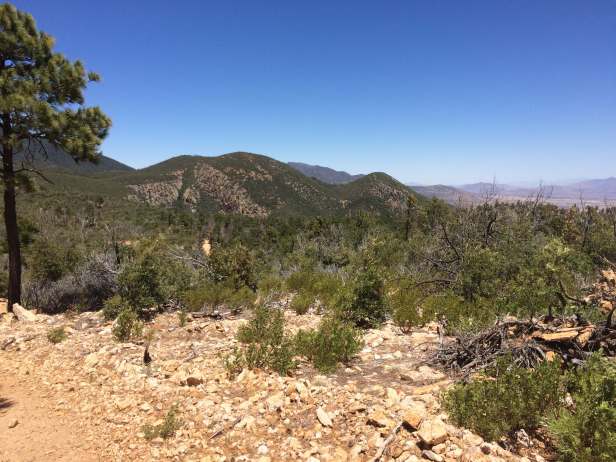 We bypassed the quartz trail to see how far up we could go. Here’s a little hint for this hike: Stay together. I wandered off to look at something and got separated from Joe. We spent twenty scary minutes trying to call out to each other over a howling wind. After we reunited we kept on hiking until the trail opened up over a cliff. So far it’s the best view I’ve seen in Arizona. We stopped there to rest a while and started back down the path to find the quartz trail. 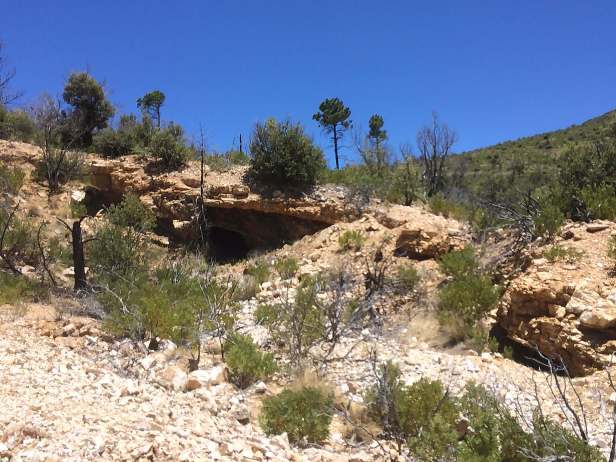 That’s when things started getting interesting. First we saw a perfect circle of tall evergreens from the top of the trail. It didn’t look natural to me so I knew that we were close to something. After exploring the evergreen circle we started finding small holes in the ground, then bigger holes, and finally a cave big enough to walk through (we didn’t). We were both tempted to explore the caves but we didn’t have hard hats or flashlights. The floor was also littered with baseball-sized chunks of rock (not a good sign). We had to balance our curiosity with safety and settled for peeking in at the door.

Is it Worth It?

The hike is hot, dusty and long. Would we do it again? Without a doubt. There’s something thrilling about sliding down a pile of mine tailings to get a good look in an abandoned mine. There were some scary moments, like when we got separated, twice. I also ended up off the trail and getting scratched by burnt deadwood (I still have scratches weeks later). I also ruined my jeans, but now those are my “hiking” jeans. We’ve been on a lot of hikes and so far this one wins for the most thrilling and the most spectacular views. We didn’t see another person for six hours. I didn’t want to leave. 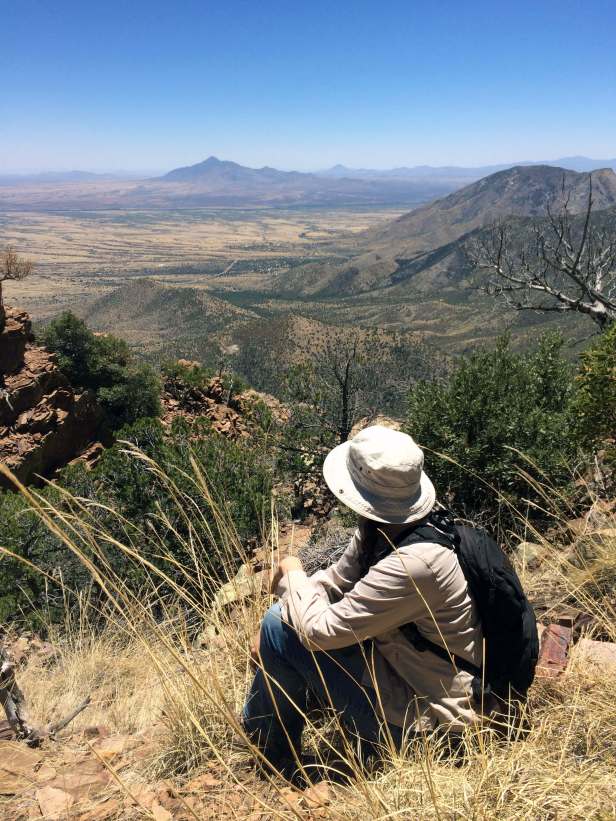 3 thoughts on “Arizona Adventures: Hiking for History in the Huachucas”