In light of the recently released news that “Charlemagne’s Bones are Probably Real” I thought this would be a good time to share my experience visiting Charlemagne’s Palace of Aachen, Germany. The first time I visited Aachen, it was the early spring of 2008, and there were few tourists in sight. When I returned, two days before Christmas in 2013, there was barely room to walk. I had two vastly different experiences at the Cathedral. However, the crowds were worth the trouble because I had only been to Aachen once before. Usually on the first visit to a place of such significance, it is hard to take it all in, and even harder to remember it all afterwards. During the second visit I was able to see a lot of things that didn’t catch my attention the first time. 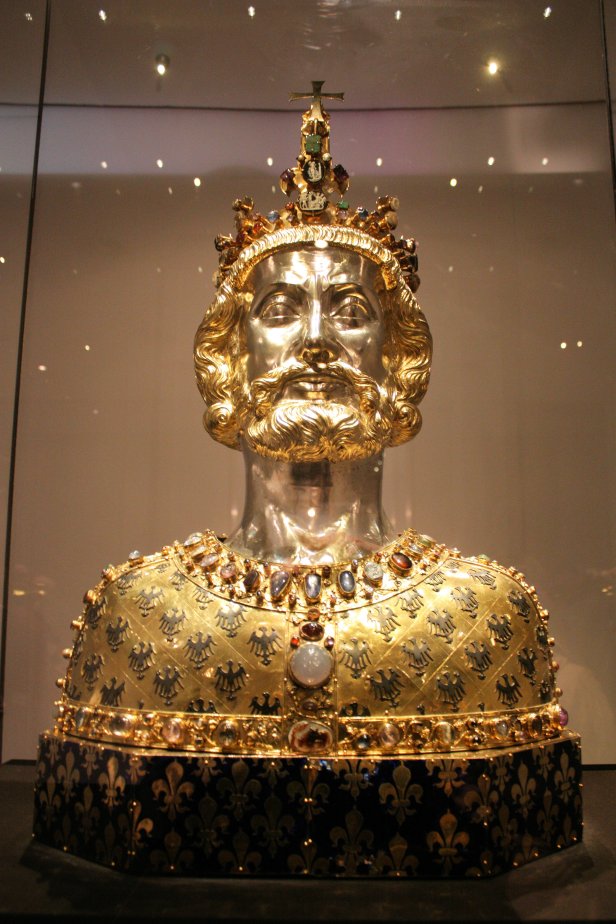 In order to get the full experience of Charlemagne and his palace, it’s a good idea to visit the treasury next door, and go on the guided tour. In order to view Charlemagne’s throne and sarcophagus, it is necessary to go on the tour. When you go upstairs to view the throne you can also see beautiful marble panels and Corinthian columns, most likely taken from Ravenna and Rome. There is usually an an English tour in the afternoon, but even if you go on  the German tour, you will get to see things that are normally off-limits.

What is it exactly that draws so many visitors to Aachen and Charlemagne’s Cathedral? The city alone is worthy of a trip in its own right with a beautiful mix of cultures, food, and people. Aachen is ideally situated right on the border of Germany, Belgium, and the Netherlands. It’s not the city that draws millions of tourists though, its the man, and by the man I mean Charlemagne. Also known as Charles the Great, Charlemagne truly was a great man is every aspect of the word. He was a great man in size (as recent studies of his bones have concluded), he was a great man in thought, and a great man in deed. His nickname, “Father of Europe” was not lightly given. 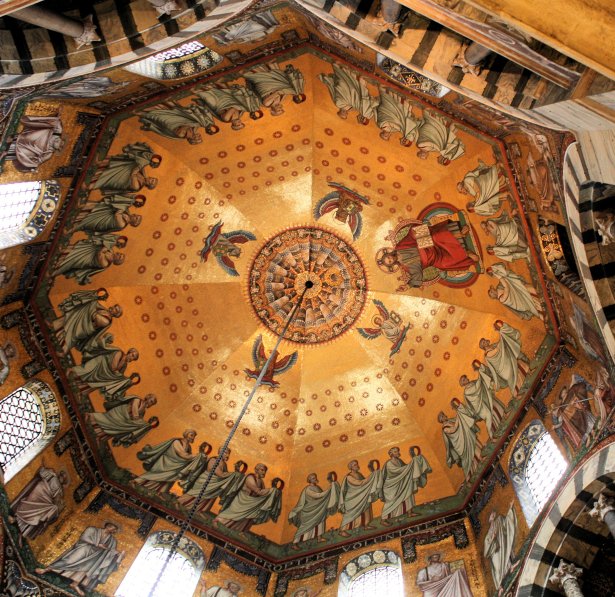 I can’t possibly convey the significance of Charlemagne in one post, or even touch on all of the history behind the man. However I can tell you that Aachen is one of my favorite places in all of Germany. I will tell you that next to Trier, Aachen is one of the most historically significant places in Germany, and the Aachen Cathedral is the oldest in northern Europe. Charlemagne’s Palantine Chapel, was once part of an entire palace complex. Today, only the chapel survives, and it is incorporated into the Aachen Cathedral. The Cathedral is unique in its own right. There is no uniformity in its later additions, and that is one of the most charming and interesting features of the cathedral. You can clearly see the evolution of more than a thousand years of architecture at one glance. Charles the Great began construction on his palace and what was then called the Palatine chapel in 796 CE, and modeled it after the basilica of San Vitale in Ravenna. History records that Charlemagne visited Ravenna on several occasions, and formally requested building material from Ravenna from the Pope. Of notable interest in the cathedral are the two bronze doors at the entrance. The bronze doors were cast in 800 CE at the direction of Charlemagne himself, and still remain in place today. It’s said to be good luck to put your hand inside the mouth of the wolf that stands guard over the Cathedral at Aachen.

By the time of Charlemagne’s birth in the late 740’s CE, the Roman Empire was a distant memory and the so called “Dark Ages” were in full swing. Imagine living there during that time and looking all around you at the remnants of a once great civilization. Roman monuments, Roman Aqueducts, and Roman roads still existed in the late eight century CE. Imagine living in such poverty and ignorance, seeing the greatness of a civilization long past all around you, but having now idea where it came from. Only legends and inscriptions, read by a few learned monks gave a hint at what had passed into legend long ago. The era before Charlemagne was characterized by constant warfare, illiteracy, and poverty. Charlemagne was by no means perfect, and calls for his canonization have gone unanswered, in no small part due to his personal life. Charlemagne is known to have had four legitimate wives, one common law wife, and at least five concubines, producing eighteen children that we know of. During Charlemagne’s era, especially for someone of his status, this was expected behavior. However, it did not sit will with the church in Rome, and thus he is not a saint. 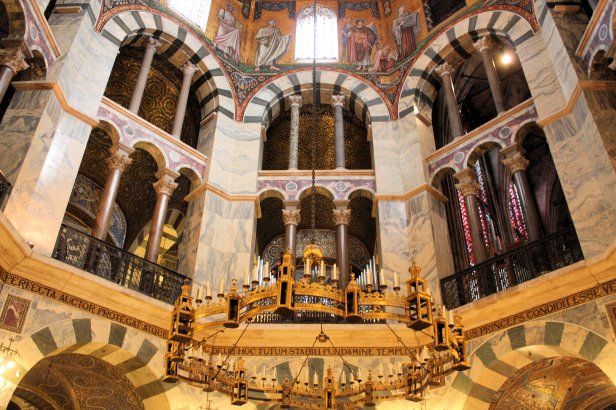 What Charlemagne did do after his coronation in the year 800 was embark upon a program of economic, military, religious, and educational reforms that changed Europe. Charlemagne’s era is often referred to as the “Carolingian Renaissance,” due to his extensive literary reforms, creation of schools, and insistence on bringing the brightest scholars from all over Europe to his court. His extensive reforms are why he is remembered as a great man today, a hero of Germany, and the man who brought Europe out of the Dark Ages. 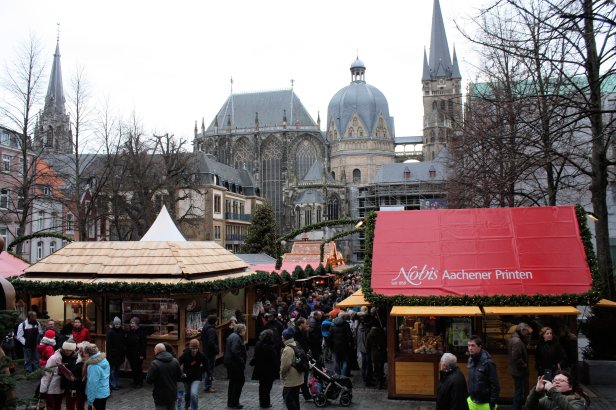 I have not kept track of how many UNESCO World Heritage Sites I have visited over the years, but Aachen makes one more. This is definitely a place I would visit again, and again, preferably when it’s not packed with the Christmas Market crowd, however sometimes you just have to deal with a crowd in order to see something of importance.

There are two things at the Cathedral at Aachen that you cannot see on your own, you must sign up for the guided tour. Charlemagne’s marble throne, and Charlemagne’s sarcophagus. Charlemagne’s throne is definitely the highlight of the tour. Charlemagne’s throne was constructed in the 790’s CE from much older marble, and has been the site of the coronation of thirty-one kings of Europe. Charlemagne himself however, was not crowned at his throne. What will strike you most about this throne is its smallness, and its absolute simplicity. For a man who was reputed to be over six feet tall, this throne seems especially small. The marble from the throne was acquired in the East, maybe from the Church of the Holy Sepulchre in Jerusalem, or perhaps the palace of Pontius Pilate. Although the place of origin is disputed, what is not in dispute is the Roman antiquity of the marble. In addition to several spots of Roman graffiti on the throne, on the side of the throne you can still see the lines of a Roman game called Nine Men’s Morris. Although we don’t know exactly where this marble came from, we do know that bored Roman soldiers once scratched a game board into the marble. (a game which will be the subject of a future post).

Charlemagne’s remains were exhumed in 1165 CE by Frederick Barbarossa. A later legend states that the Emperor Otto opened Charlemagne’s tomb and found, “the emperor, seated upon a throne, wearing a crown and holding a sceptre, his flesh almost entirely incorrupt.” Legends aside, when Charlemagne’s tomb was again opened in 1215 CE, Frederick II re-interred his remains in the gold and silver sarcophagus that still lies in the apse of the Aachen Cathedral today. 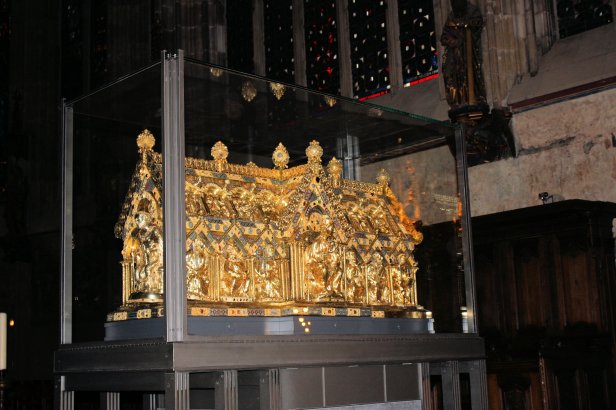 Charlemagne on the History Channel

“The Life of Charlemagne” by Einhard