Limberg an der Lahn is a quaint medieval town tucked away in Hesse, Germany. You can’t miss the imposing late-Romanesque Cathedral from the highway. Limberg was founded in about 800 CE. It is one of the few towns in Germany where the medieval “Old Town” escaped destruction over the years. Entire blocks of original buildings remain. Limburg was almost completely destroyed by fire in 1289. The oldest free-standing timber frame house in Germany survives in Limburg from that period of reconstruction.

We happened to have lunch yesterday in a surviving fifteenth-century building. The Gasthaus Zum Burgkeller is a true medieval German building. Ancient timbers line the walls, and there are mysterious staircases and nooks around every corner. After having a delicious and hearty German lunch of salad, bread and potato soup, I happened to mention the server that I study history. She was excited to discuss the history of the Burgkeller, and invited us down for a tour of  the cellars attached to the property, both carved out in the tenth century.

The first cellar we explored was basically a storage area for the restaurant. It was an ancient, musty hole carved into the ground. I wonder if the staff were secretly laughing at us because while I find the cellar absolutely fascinating, they walk up and down those stairs all day! Ancient limestone flaked off the walls as we walked down the awkwardly uneven and narrow stairs. The cellar smelled like it was that old. I can’t exactly explain what a tenth century cellar smells like, but it is unlike any other smell in the world. The second cellar was really something special because it had been converted into a functional and intimate pub setting. The area was closed during lunch but we were offered a special tour. Our guide (who was also our server) pointed out a gravestone that had been incorporated into the architecture of the bar.

Even though I could have spent 3 hours down in that dark cellar exploring every alcove, Limburg is much more than a dank and musty eleven hundred year-old cellar. The Christmas Market is in full swing and there is the Old Town to explore. There is also a surviving section of the original town wall, an early fourteenth century bridge, and many buildings preserved from 1300-1500 CE. The star of Limburg is the Limberger Dom, or Saint George’s Cathedral (Sankt-Georgs-Dom), built in 1235 upon an older monastery. Who knows what that older monastery was built upon. 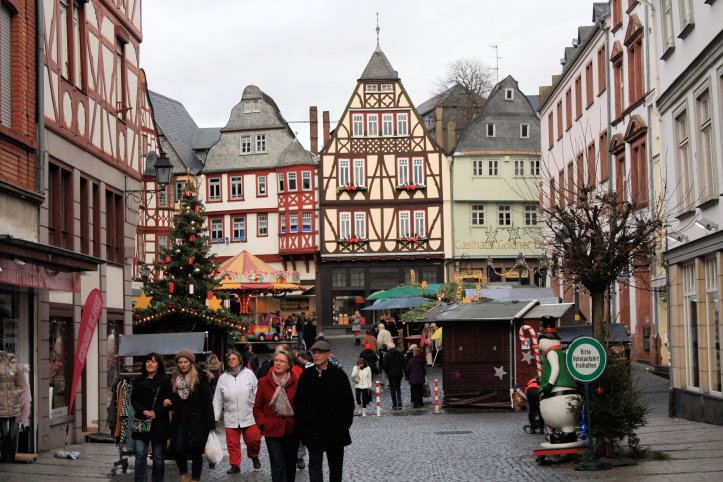 Saint George’s Cathedral is a beautiful example of late Romanesque architecture. This style of architecture is one of my favorites. It reminds me of the ancient world, and the Roman tradition. The massive walls, arches, and solemnness always move me. Although the official history of Limburg dates to about 800 CE, many cities and towns in Germany have Roman foundations. Except for Trier, much of that Roman history has been lost to time.

This  was my second visit to Limburg. The first visit was a brief stop on the way back from Aachen three years ago. This time I was able to explore the city a little more in depth, and wander the Christmas Market. Almost every German city has a Christmas Market this time of year, and there is something very special about them. The people, the food, handmade crafts from around the world, and the general lack of commercialism that permeates every aspect of Christmas in the United States makes Christmas in Germany something special.