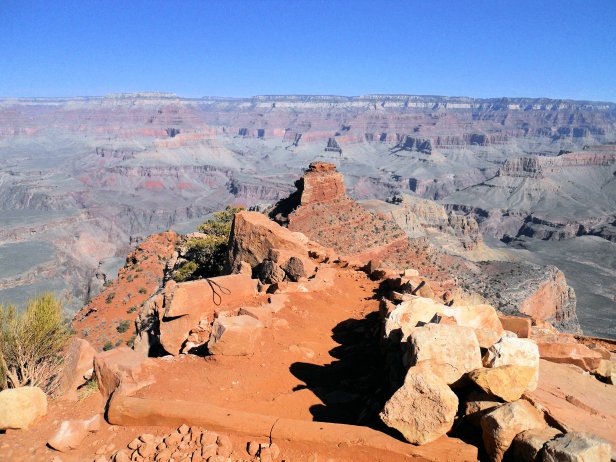 I started hiking again last week. On those long solo hikes the mind tends to wander. I started thinking about one of the hardest (and best) hiking adventures that I’ve ever been on. It really wasn’t that far, about 4 miles round trip, but it was straight down into the Grand Canyon.

I had already visited the Grand Canyon a few times, but I never hiked down into the canyon. I just drove to each scenic overlook and then took photos like millions of other tourists. This trip was different. There was a pull to go explore further. I can’t explain why. I didn’t fight the instinct. I started planning for my hike. The weather being icy in April and this being a solo hike meant that I needed to plan well. I chose one of the easiest trails possible, The South Kaibab Trail.

There are dozens of trails to choose from, ranging anywhere from a few miles, to 15 miles down to the Colorado River, to nearly 30 miles from South Rim to North Rim. Many people have died over the years attempting to hike just 15 miles to down to the Colorado River. The most common cause of death is heat stroke and dehydration. Inexperienced hikers can’t grasp just how much water is necessary to hike down into the canyon.

I did my best to research and prepare for this short hike in cool weather. I packed a  full Camelback of water (3 liters), several bottles of Gatorade, and some snacks. By the time the 4-mile hike was over, I had run out of water, drank both bottles of Gatorade, and all of my snacks were gone! Even in cool weather the exertion combined with the elevation change takes a toll on the body.

Imagine my and surprise when I passed a family of four, two daughters in ballet flats, and no one had a backpack on them, or was even carrying so much as a single water bottle. They jaunted ahead of me without a care in the world but by the time I caught up with them a few minutes later, they had already turned back. I can’t imagine how much water it must take to hike down in the middle of summer. The NPS Hiking Safety page recommends at least a quart per person per hour, and much more in the summer.

I also chose the South Kaibab Trail because it is possible to see some of the unique geology of the Grand Canyon on the way down. I passed through three geologic layers on the way down, and that is something you can’t see close-up from the overlooks. The South Kaibab trail was also at one extreme end of the South Rim, away from the crowds (not that there were that many during April), and away from the tourist lodges. My travel theme seems to be off season and against the flow of tourists, and this trip was no different.

I was extremely nervous hiking down into the canyon by myself, and even though I had prepped and planned the day before, I was concerned that I was not adequately prepared. The hike started off easy enough, but within a few minutes the trail narrowed to the point where only one person could pass at a time. In addition to the narrowness, there were sheets of solid ice on many spots right on the trail.

I seriously considered turning around after only a few minutes. The narrowness, the ice, and the sheer drop off was frightening. Fortunately, after pushing on for a few more minutes, the trail widened, the sun was on my face and my fear evaporated. I also no longer needed to flatten my body against the rock in order to let someone on the way back up pass. Getting out of the way for the mule train on my way back up is quite another story.

I had originally planned to hike all the way down to Skeleton Point, about 4 miles down. However, by the time I stopped to rest at Cedar Ridge, I knew it would not be safe to continue because I had very little water left and the hike back up takes twice as long as the hike down. 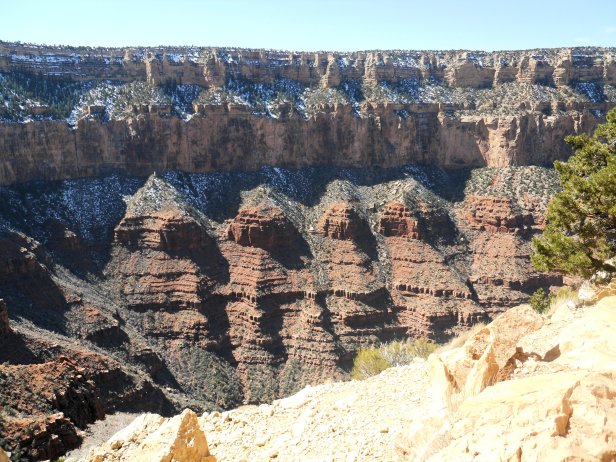 While I was resting at Cedar Ridge I spent a lot of time wandering around and checking out the unique geology. I had passed through the Kaibab Formation, Coconino Sandstone, and ended up resting on Red Hermit Shale at Cedar Ridge. The Red Hermit Shale is full of fossils. Pick up a random rock and turn it over and it’s likely to find a plant or animal fossil. 280 million years ago, Cedar Ridge was part of a coastal plain and the fossils of the plants and sea life from that time are still visible in the shale. More about the geologic history of the Grand Canyon can be found on the National Park Service “Layers in Time” publication.

April was actually a great time to hike down the South Kaibab Trail. When I first started out I had on several layers, but by the time I reached the Cedar Ridge rest point I was ready to strip off everything but a long-sleeved t-shirt.

I really wanted to continue on to Skeleton Point, but I didn’t have it in me to go two more miles straight down. It would have been foolish without adequate water. The elevation change from the trail head to Cedar Ridge was 1,140 feet. It’s another 900 feet and two miles down to Skeleton Point. I wonder why they call it Skeleton Point anyway? I’m sure there’s an interesting story behind that.

I spent a few hours enjoying the view from Cedar Ridge. It was nice to reflect on the accomplishment of hiking down into the Grand Canyon. I was slightly disappointed at the decision to turn back, but I knew it was the right decision. This hike will stand out as one of the most memorable and rewarding hikes of my life. I can’t wait to go do it again! Next time I’ll pack more water. Maybe I’ll hike the popular Bright Angel Trail, where they have a natural spring that provides water along the way.

1. Take way more water than you think you will need.

3. Take a few snacks, you will get hungry.

4. Listen to your body, if you feel like you can’t push on, then don’t do it! You will regret it later.

6. Let someone know what you’re doing and where you’re going.

12 thoughts on “How to Solo Hike the Grand Canyon”