Sometimes the best trips are right in one’s own backyard. Shenandoah National Park is only 25 miles from my door, but when I was ill 25 miles seemed like 2,500 miles. Today was my first day back to nature and back to real hiking since the beginning of August, and I am grateful to be able to experience the beauty of nature. The transformation of the park from summer to fall is absolutely stunning. At the lower elevations the greens, yellows, and reds are still bright, but the higher up you go, the more muted the colors become. The peak “leaf peeping” time was right around the two weeks the park was closed for the government shutdown. The photograph above was not taken today, but several weeks ago. The park still has some green, but not that much! 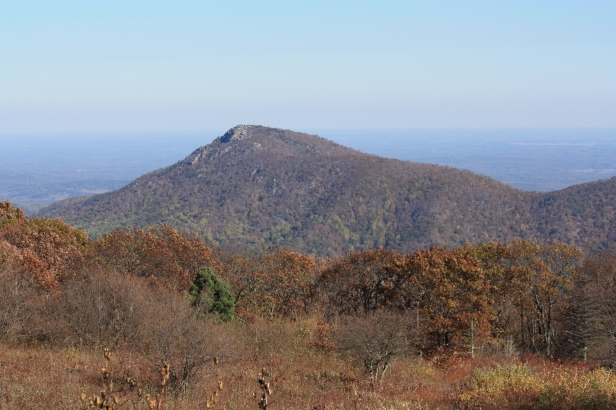 In addition to natural beauty, Shenandoah has a secret hidden history. This history is all around the park, on marked trails and also paths passed down by word of mouth. When Shenandoah opened on December 26, 1935, there were many families living within the park boundaries. Most of those families were forced off the land against their will, and paid only a fraction of what the land was worth. A little known fact about these families is that some elderly residents were allowed to remain within the park until they passed away.

The families that lived within the park, in the hollows, and on the hills have their own rich history and culture. Life was hard but they managed to make a living from the land and created their own way of life. All throughout the park you can hike right up to the abandoned homesteads of a culture long vanished. One of the more well-known sites, and one that is actually listed on the map is the Pocosin Mission Trail, about two miles round trip. Halfway down the trail you can walk among the remains of a house, outbuildings, and a church. Artifacts from daily life are strewn all about the place, and it is against the law to disturb them. As we enjoy the park and all of its amenities today, it is important to remember the people who gave up their way of life for the park. On a positive note, the National Park Service has set up many exhibits in the visitor’s centers documenting the lives of the people who once called Shenandoah home. 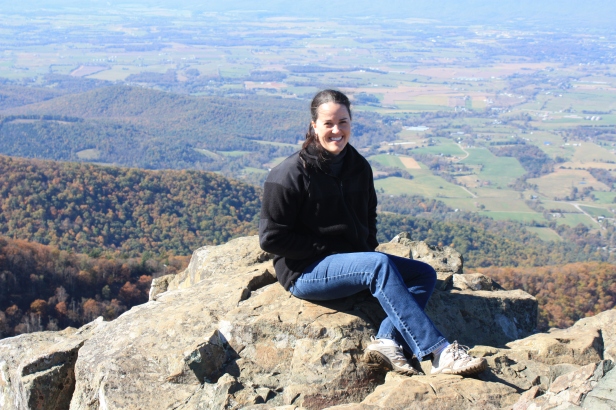 Although I am always seeking out history, today I was looking for nature. I found nature while hiking up the Stony Man Trail  to the second highest peak in the park. So far this is one of the most spectacular views in the park.  That’s not saying much though, because the park is one hundred miles long and I have visited less than fifteen times. Since this was my first hike after an extended period of hanging around the house, I selected a trail that was only two miles long and labeled “easy.” The trail was easy, on the way down! The hike up was quite steep, but the view was well worth the effort. One of the great things about Shenandoah is that there are PDF files on  the web for almost all of their hikes. You can decide where you want to go, how far you want to hike, and select the difficulty level. The free trail maps can be found on the National Park Service website. The maps have saved me a lot of time since I’ve started using them.

There’s a lot more I could say about Shenandoah National Park, but I’ll let the photographs substitute for words. I do know that this place has become very special to me since I moved to Charlottesville last year. It’s well worth a day trip, and it’s only about 75 miles from Washington D.C. I recently learned that while the park is open all year, most of the facilities, visitors centers, restaurants and lodges are closed from December – March. Some of the facilities even shut down on November 1st. If you decide to cruise the 100 miles of Skyline Drive that runs through the park, make sure you have a full tank of gas! The National Park Service has an entire webpage on winter safety in the park.

2 thoughts on “Back to Nature or Shenandoah Part II”