The Island of Women. Fifteen minutes by ferry from Cancun and you’re there. It’s rumored to be one of the most beautiful spots in the Caribbean Sea. While this small Caribbean island is truly beautiful, it’s also one of the places that I’ve experienced true fear while traveling.

The trip to Cancun didn’t go well from the first day. Then again, what can live up to six blissful weeks in Tulum? Something about Cancun just radiates bad vibes.

What better way to get away from the stress of Cancun than a day-trip to Isla Mujeres? A quick check of the weather indicates that even though Hurricane Earl is in the vicinity, it’s probably going to bypass us. The grey skies hanging over us on the walk to the ferry should have been the first hint to turn back.

But we ignored it. 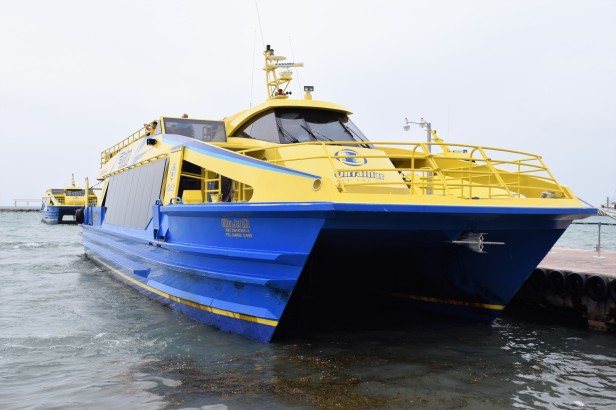 Getting to Isla Mujeres

The Ultramar is a super sleek high-speed ferry. It’s actually pretty cool and really cheap. As you can see from the photo above, the skies were grey, but didn’t look too scary. The ferry was about half full and the trip was choppy and nauseating despite the sea-bands I was wearing. The ferry left from Puerto Juarez (at the extreme north end of Cancun, far away from the hotel zone). It’s a short 15 minute ride and costs 100 pesos ($5). 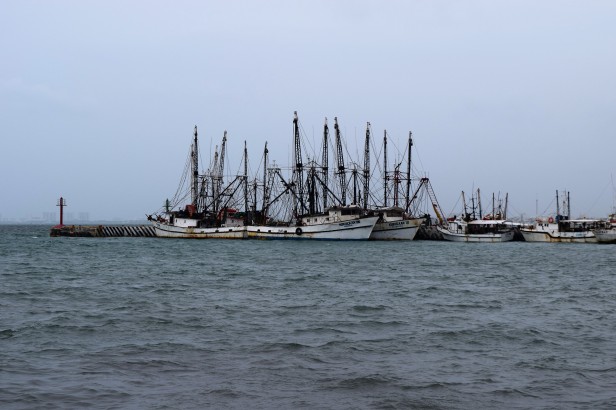 We didn’t really plan this excursion so we had no idea what to do when we got off the ferry. Everyone is renting a golf cart, seems like a good idea. After checking several vendors we decided to just walk. Why? Every vendor wanted us to hand over our passports and sign a ridiculous contract. The contract stated that we would be responsible for hundreds of dollars in damages if the golf cart was returned dirty or with a single scratch. We rented a car for a solid week with less hassle, no way. So we started walking. 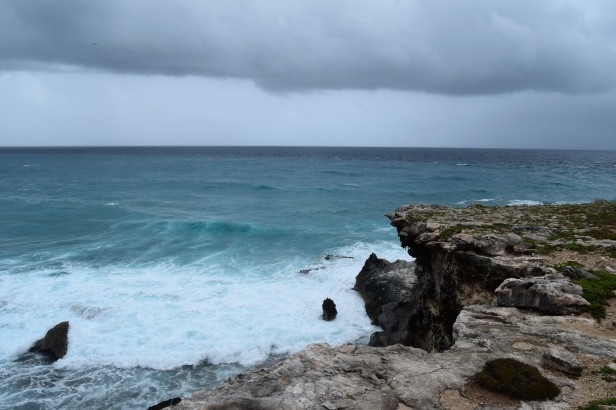 Isla Mujeres, like many sites in Mexico was once sacred to the Maya. Ixchel, the goddess of childbirth and medicine, is particularly important to the residents of Isla Mujeres. Another substantial Mayan temple was once located on the southern tip of the island, until hurricane Wilma destroyed it in 2005. All that’s left today is a single reconstructed temple.

After getting off the ferry at the center of Isla Mujeres, we walked to the westernmost tip to check out the scenery. It was nice but not really spectacular. The turtle sanctuary was next on our list. 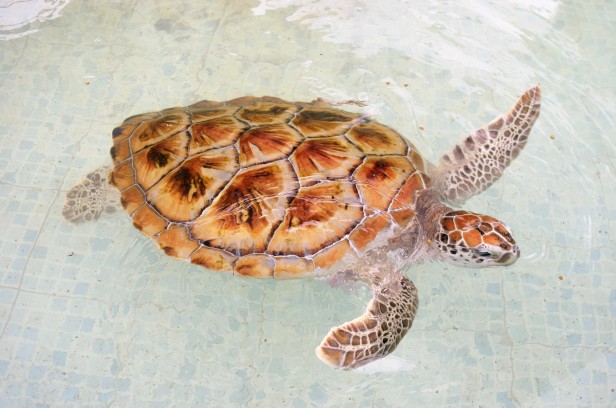 The turtle sanctuary did not disappoint. We were able to view turtles that I’ve never seen before. All were swimming blissfully around in their tanks, waiting to be released back into the ocean. We fed them a special turtle food. They are amazing, delicate, beautiful creatures.

The Mexican government runs the Tortugranja turtle “farm.” The small entry fee of $3 USD also contributes to the upkeep of the turtles. It’s well worth the price to view sea turtles up close. I’ve never done anything like this before and it’s a unique experience. 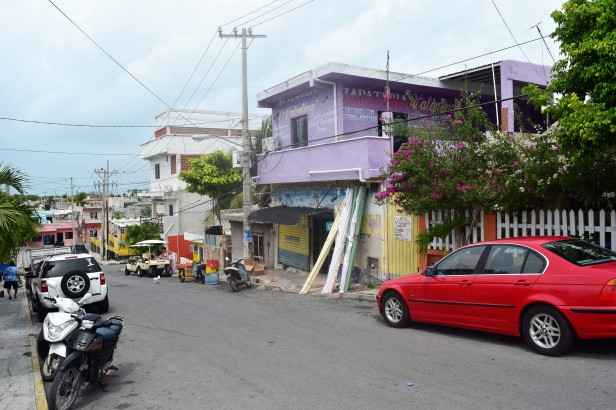 No way the historian in me can bypass the Mayan Temple ruins. The ruins are at the extreme south-eastern tip of the island. Meanwhile the skies are getting darker, the surf is picking up, and the wind is getting stronger. Still we ignored the signs of the impending hurricane. The ruins were mostly empty except for one girl walking dangerously close to the edge of the cliff. We stayed on the sidewalk, and for good reason. We called out to the girl walking along the edge and warned her that ground beneath her has eroded away and is dangerously undercut.

This is why we braved the weather, ferry ride and long walk. The view from Punta Sur is absolutely stunning. Twenty countries and I’ve never seen anything like it. While we were busy ignoring the signs of bad weather, we decided to have a leisurely lunch at Acantilado. The open air restaurant offers spectacular panorama views of the Caribbean sea. I can’t even remember what we had for lunch. We were so exhausted from the walk across the island and the views were hypnotic. I walked around every inch of the restaurant trying to take it all in. Still, it’s getting darker and windier. When I go back and look at my photographs of Isla Mujeres in chronological order, it’s obvious that a bad storm’s coming. 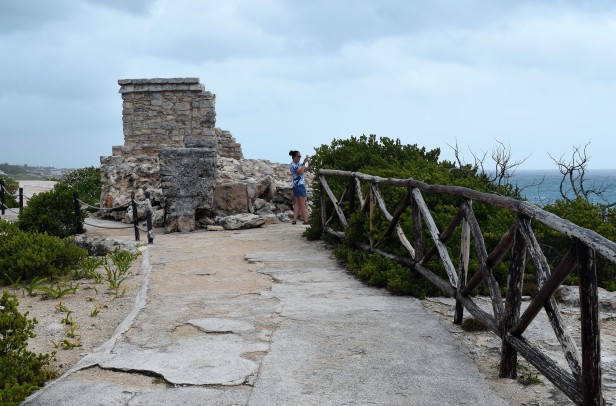 It Starts to Get Ugly

Just about the time we finished our meal and walked out on the terrace is when the weather started getting really nasty. We happened to be walking along the cliff terrace the first time we really started paying attention to the weather. A leisurely stroll just turned to panic. The waves were starting to come up and over the railing and smash into the rock wall. It was then that we had our uh-oh moment. We realized it was time to go, and fast.

The smart thing to do would have been to go and hang out inside the restaurant, but they really didn’t have an “inside.” Instead of waiting it out, we started walking the four miles back to the ferry. That decision is a huge mistake. 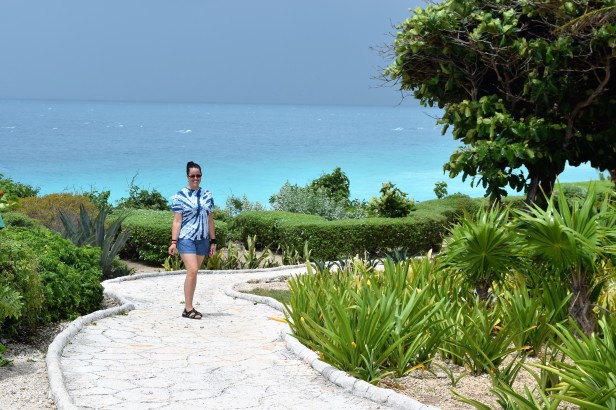 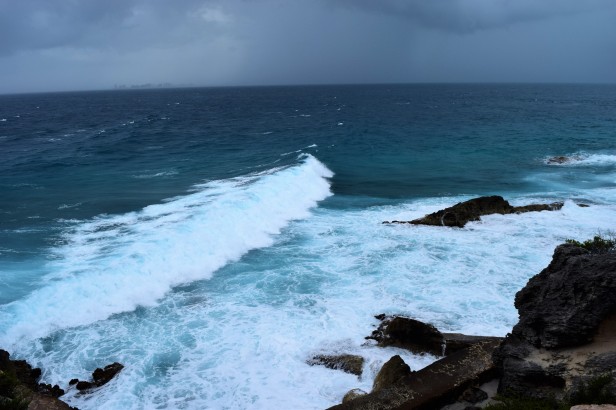 I can’t over emphasize just how big of a mistake we made. About 20 minutes into the walk the rain starts. A torrential stinging downpour. It was raining so hard I couldn’t see to walk. Then the lightning started. All around us. The lightning strikes were so close that the hair on my face was standing on end and my ears were ringing. There we are on the top of a cliff with no shelter in sight. All this time were trying to hitchhike back. Hitchhiking is easy in tourist spots like this and the locals are usually friendly. Except the locals aren’t stupid enough to be out in a hurricane. The only vehicles that passed us were western tourists who slowed down just enough to laugh at our predicament. Yes we got ourselves into it, and we needed to get ourselves out of it, fast. 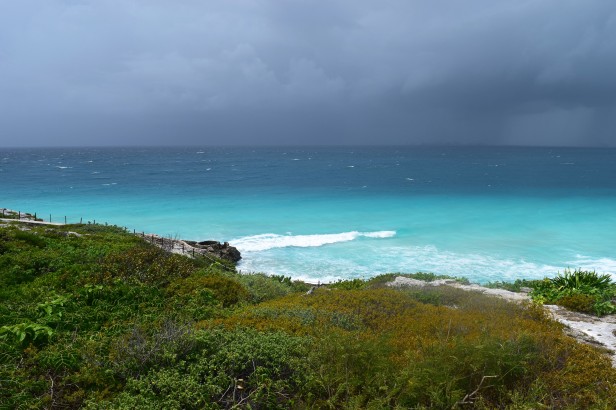 Then a newlywed couple stopped their golf cart.

I had never in a million years been so grateful to ride in the back of a golf cart. Even though the rain was still stinging my face,  I was still grateful. Every minute in the golf cart was a minute less walking on a cliff. Lightning was still striking all around us, but I was grateful for the ride. I was trying my best to shield my shiny new red Nikon from the rain. Although it was tucked away in a backpack and the backpack was under my shirt, I thought the camera was ruined.

I was holding on to Joe’s arm as tight as I could and crying like a baby. I was truly terrified and wasn’t sure what was going to happen. 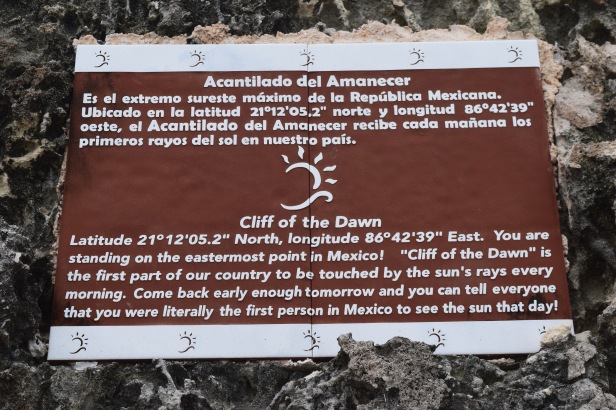 And Then it’s Over

Just like that the rain, wind and lightning abruptly ended. The last few minutes in the golf cart was spent trying to get through huge puddles of water and checking out the scenery. The good Samaritan couple dropped us off right at the ferry entrance even though it was well out of their way. Their names escape me because we were all just trying to get out of the storm. I forever wish them happiness and good karma for stopping for us. They very well could have saved our lives.

Would we go through this again? Probably not, but we would definitely return to Isla Mujeres. It is truly one of the most beautiful places I’ve ever seen. It’s probably even more beautiful when it’s sunny. In  the end, we have some amazing memories, and even managed to save the camera.

4 thoughts on “Visiting Isla Mujeres, During a Hurricane”