Your Guide to the Epic Mayan Ruins of Coba 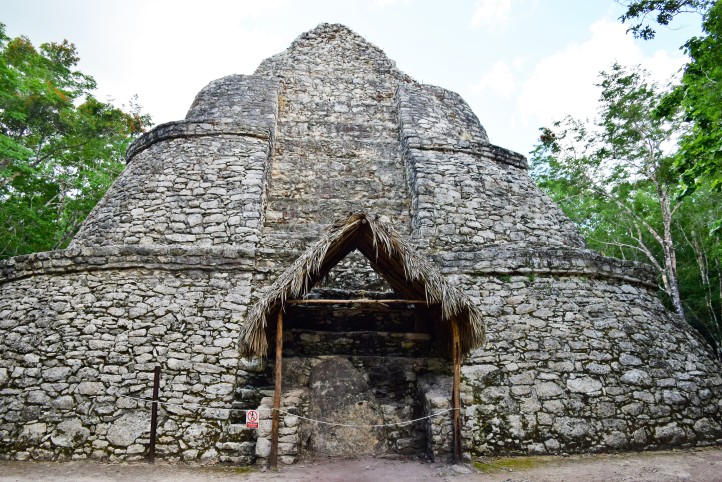 The Mayan ruins of Coba are some of the most spectacular and underrated ruins in the Yucatán. While many travelers include Chichen Itza and Tulum in their itinerary, Coba is frequently bypassed. Even with that, Coba can still get on the crowded side. Coba is unique in the fact that you’re still allowed to climb the main pyramid. Our goal was to climb the pyramid alone, and we managed to do just that by following the tips below.

A Short History of Coba

Coba is one of the most important archaeological sites in the Yucatán. During the Late Classic Period from 600-900 AD, Coba dominated the surrounding area. Coba is famous for its sacbebob. Sacbebob are raised stone pathways that lead from one area to another. Archaeological evidence suggests that Coba was inhabited as far back as 50 AD. Chichen Itza and Coba maintained a rivalry that lasted for two centuries. Eventually Coba lost prominence as Chichen Itza rose to power. At one time Coba was the most powerful Mayan site in the Yucatán.

Arrive as Early as Possible

Did we look like idiots sitting in our car 30 minutes before the gate opened? Probably. Coba opens at 8am. We left Tulum at 6:30 in our rental car and arrived at Coba by 7:30. We were the only ones there. Yeah maybe we looked stupid to the guards, but it allowed us to climb the pyramid with no one else there. Arriving early has the bonus of missing all the aggressive vendors outside of the park.

If you’re staying in Tulum, Playa or Cancun, it’s hard to miss the vendors selling guided bus tours to Coba, Chichen Itza, and other major sites. My advice is to skip those tours. We actually signed up for a bus tour to Coba just to check it out. When we arrived to board the bus we were told that we were going to a cenote for an early morning swim, then having lunch, and would arrive at the ruins about 2pm. This was unacceptable to us in so many ways. Why go to the ruins in the heat of the day? Why go swimming when it was cooler? We cancelled the tour and rented a car the next day. 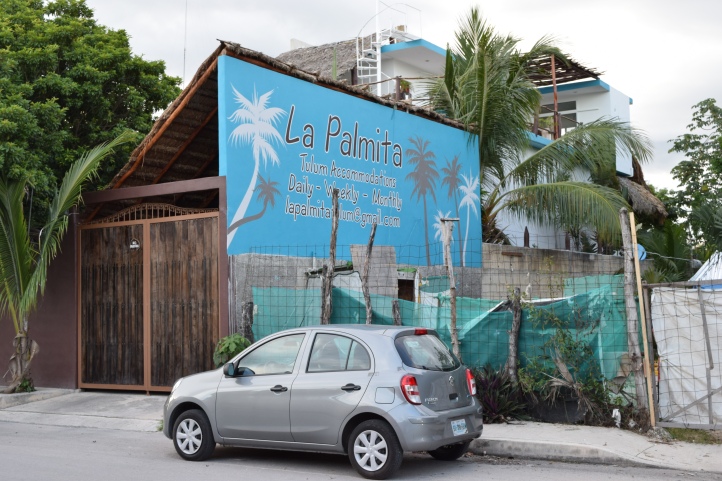 Do yourself a favor and skip the bus tours, rent a car, and buy a nice guidebook. You’ll be glad you did later. We almost didn’t rent a car. Instead we were going to take the bus everywhere. Looking back, renting a car from Tulum was one of the best decisions of the trip because it allowed us a lot more time to explore. Renting a car is extremely easy. We didn’t have any problems, and the roads in the Yucatán are some of the safest in all of Mexico.

Head Straight for the Bicycles

You have three choices when the park opens. 1. Walk a mile to the pyramid, known as Nohoch Mul. 2. Hire a bicycle taxi 3. Rent your own bicycle for 50 pesos. We opted to rent our own bicycles. Don’t play around. Rent your bicycle and get moving if you want to be the first one at the pyramid. We had the pyramid all to ourselves for at least 45 minutes.

Skip Everything and go to the Main Pyramid First

The first thing we did was head straight for the main pyramid. You’re going to pass a lot of sites along the way. Don’t worry, you can catch them on the way out. Seriously, don’t stop for anything else if you want to see the pyramid alone. I had this plan in my head for a while, and I wasn’t sure it was going to work. Somehow everything fell into place perfectly. I REALLY wanted to see and climb the pyramid alone and enjoy the quiet solitude of the jungle. If you’re thinking about climbing the pyramid, just do it! 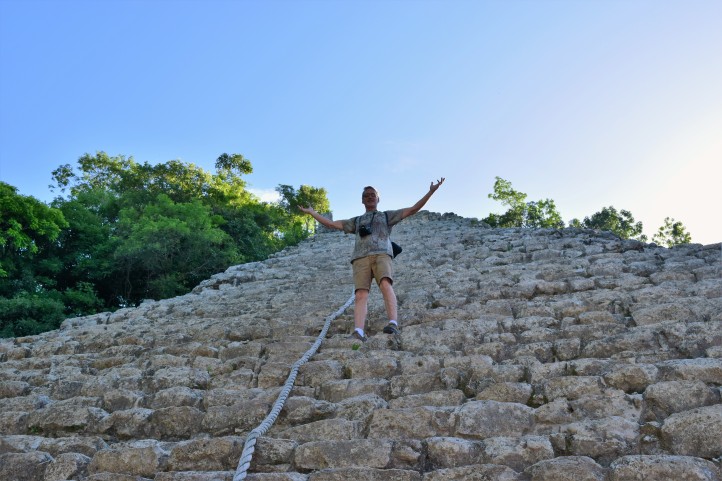 Stunning views await those brave enough to climb the 137 ft tall pyramid. I’m not going to lie, it looks pretty scary. However we didn’t come all this way to not climb the pyramid. After all, I’ve done far more ridiculous and dangerous things in the Army. Climbing the pyramid is not as hard as it looks. In fact, the Pyramid of Teotihuacan near Mexico city is far more dangerous.

The key to climbing the pyramid of Coba is to take it slow. One step at a time and mind your footing. The steps are uneven, steep, and worn down in places. After all, it’s pretty old. It probably won’t take you ten minutes to climb, especially if you follow my tips and get there first. Our reward getting to the park early, renting a bicycle, and heading straight for the pyramid? A half-hour of jungle bliss without another person in sight. Would we go through all of that again? Definitely, yes!

Coming Down the Pyramid

Coming down the pyramid is actually harder than going up. Depending on where your center of gravity is, you may just topple over the steps. All kidding aside, it’s important to be careful when coming down. I thought I’d be coming down on my rear, one step at a time, but it wasn’t that bad. A few Mexican teenagers behind me came down as if they were sprinting to catch a bus. Although I didn’t have to come down on my rear, I did come down side stepping and holding the rope. It took about ten minutes to come down the pyramid.

Take the Time to Observe Wildlife

The more I travel, the more wildlife catches my attention. At all of my travel destinations I make it a point to stop and connect with the wildlife. Maybe that’s the years of yoga practice and training, or maybe it’s just what happens when one gets older. Taking a few minutes to connect with the life around me helps me remember it’s not all about me. There are other beings that matter. It’s a feeling I can’t describe, but it’s a very enjoyable experience. There’s probably no better place than Coba to commune with wildlife. Especially if you make it to the top of the pyramid alone.

Look and Listen for the Mot Mot

Once you get to the top of the pyramid, take a moment to listen for the sacred motmot. This bird is found only in cenotes (natural limestone wells). The motmot is sacred to the Maya. Legend has it that if you spot a motmot with two tail feathers, the water is safe to enter and drink. If the motmot only has one tail feather, then the cenote water isn’t safe. There are many cenotes around the ruins of Coba. We heard several motmots hanging out at the top of the pyramid. It must have been time for breakfast because we saw the birds eating butterflies, spiders, and fat green caterpillars.

Visiting Coba was one of our best experiences in Mexico. Whether you’re staying in Cancun, Playa del Carmen, or Tulum, I highly recommend renting a car and driving down to the ruins of Coba. If you follow my tips above,  you may just enjoy some time alone on top of one of the great pyramids of the Maya.

WHAT: Coba Mayan Ruins
BEST TIME TO GO: May – September
HOW MUCH: About $4
HOW FAR: 30 Miles West of Tulum